Spring has sprung and fiddleheads & ramps are here!

Fiddleheads and Ramps sprout mid to late April with a short window of availability. Buy these spring seasonal vegetables as soon as they appear in your local markets.

Now you're probably wondering, why would I want to eat them? They are quite strange looking. Simply put - they are easy to prepare, delicious, and you will impress your guests when you serve them! Fiddleheads have a unique look and taste. I would best compare them to asparagus with a grassy, earthy and delicately sweet taste.

What are Fiddlehead Ferns?

Fiddleheads come from the Ostrich Fern (Matteuccia struthiopteris), known locally as the fiddlehead fern throughout New England and parts of Canada. They grow wild like dandelions and mainly in wet areas near brooks, rivers, and lakes during late April, May, and early June, dependent on when the snow has melted.

When purchasing fiddlehead ferns, look for tightly coiled and bright green ferns. Avoid ones that have a dark colored center as this indicates them being older.

I recommend using them soon after purchase. But, if you do have to store them, clean the fiddleheads first. Then place them in a tightly sealed plastic bag to avoid them from drying out. Store them in a refrigerator for only a few days. You can prolong storage for up to 3 weeks in the fridge by submerging them in cold water. It is best to change the water every 2 -3 days. If you want the taste of fiddleheads in the fall/winter, they can be blanched, dried, and placed in a plastic freezer bag for up to 9 months in the freezer.

How to clean clean & prep

To clean, put them in a bowl of cold water, and rub away the papery brown husks. This is probably the most time-consuming part but well worth the task. The stems are edible, but I usually trim them down, so they are under 2 inches in length.

They are best prepared by blanching or steaming first, and then a quick sauté with garlic & oil. It is not recommended to eat them raw as they may contain contaminants that can make you feel ill.

And yes, fiddleheads are good for you! They are a source of omega-3’s, contain 2x as many antioxidants as blueberries, and are loaded with fiber. A ½ cup serving will fill you up quickly.

Ramps are another spring time favorite!

Ramps are a North American species of wild onion and are grown widespread across eastern Canada and the eastern United States. They taste stronger than a leek, which generally has a mild onion flavor and is more pungently garlicky than a scallion.

Cooking Tip: You can use ramps in almost any recipe you would use scallions or spring onions.

Just like fiddleheads, use them shortly after purchasing so they don't wilt. It would be terrible to miss the boat on using them while they are vibrant, green and fresh!

They are quite dirty so be sure to clean them well. I recommend trimming the root tips off and gently rinsing them under running water getting in between the crevices where all the mud likes to hide. Then gently pat them dry with paper towels.

How to sustainably harvest Fiddleheads & Ramps:

Fiddlehead ferns and ramps are both very sustainable vegetable options. They have relatively low carbon footprints and low water demands. However, it is essential to be mindful when purchasing or foraging these plants as they can easily be over-cultivated.

In a study done by David Fuller at the University of Maine, a significant decline was observed in the production of fiddleheads from which he had cultivated more than 50 % of the fiddleheads the previous year. He concluded that if fewer than half of the fiddleheads are harvested each year, the plant can continue to grow continuously year after year.

It is vital to be mindful when harvesting ramps as they have a controversial history. In 1995 it became illegal to sell ramps in Quebec, Canada, and over-harvesting put them on the endangered list. This created such a demand for ramps that they appeared on the black market. Since then, the species has repopulated itself, but it is still essential to be mindful of proper harvesting techniques. For example, pulling the entire ramp out with the roots does not allow the plant to regrow the following season. Instead, you should harvest only the tops of the plants and cut leaves from the center cluster. If a patch looks sparse, move on and look for a more densely grown area.

If you need guidance on how to make this recipe, click on the link below: 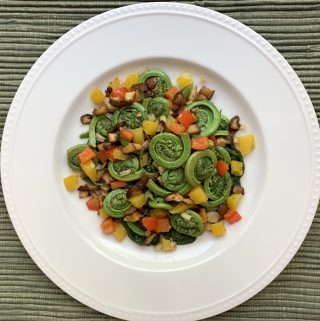 I recommend to have this as a side dish with grilled fish or marinated grilled tofu.

Keyword Fiddleheads, Ramps, Vegetarian Side Dish
Tried this recipe?Let us know how it was!