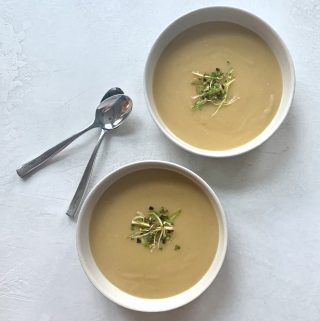 Potato Leek Soup with Crispy Leeks is healthy and super easy to make any day of the week. Using coconut milk helps to make it creamy and vegan – no dairy required!

How do you make Potato Leek Soup?

It just takes a few simple steps to make this Potato Leek Soup. After the prep of onions, leeks, and potatoes – combine them in a pot with broth and cook for 40 minutes. Then with either an immersion blender or a regular blender, blend it until just smooth.

It is quite simple to convert a traditional recipe into a vegan version. Simply substitute butter with olive oil, chicken stock with vegetable broth and dairy with coconut milk.

Interested in changing over more of your favorite recipes to plant-based ingredients? Sign up below for an 8-page guide you can use whenever you want!

Leeks are the perfect winter vegetable!

In season from late winter through to early summer – but typically grown all year round – leeks provide a welcome bit of green as well as a pleasantly mellow alternative to onions during the colder months as part of the allium family. They are also closely related to garlic.

While leeks are delicious eaten on their own either roasted, steamed, or sliced and cooked low and slow with plenty of salt into a soft muddle, they form the backbone of many dishes including this potato leek soup and can be substituted anywhere that calls for white, brown or sweet onion for a sweeter, more mellow flavor.

The list of vitamins and minerals found in leeks is endless: eating more leeks is good for your digestion and will help promote gut health as they’re also packed with soluble fiber.

How to clean and prep leeks

Rinse the leeks to remove any visible grit, soil or sand. Remove and compost any discoloured outer leaves and any very dark green tough tops. You’ll want to keep most of the green on the leek, though. Slice off the tough root at the bottom.

If you are chopping the leeks split the leek down the middle and roughly chop into small pieces. Run the pieces in a sieve or colander under the cold tap to remove any dirt.

If you need the leek intact, use a knife to split the green part of the leek down the middle, keeping the white part intact. Run under a cold tap, gently splaying the layers to rinse out any dirt. To cut down on water waste if you’re prepping a whole bunch of leeks, fill a bowl with cold water and submerge the tops of the leeks and do the same.

What is the environmental impact of growing leeks?

Leeks are considered sustainable, using a relatively low amount of water to grow (39 gallons per pound), and only producing 1.6kg of Co2 per 1 kg of leeks. They don’t cause any damage to the land they’re grown in as long as they are grown organically without use of GMO’s or chemical pesticides. Remember to buy locally if possible to support local agriculture, as well as organically! 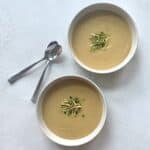 *Cooks in half the time using an Instant Pot 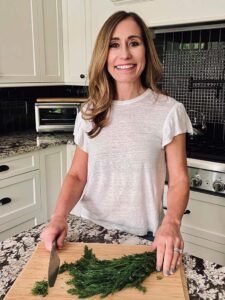 Explore TMF and gain the skills and confidence to make sustainable food choices that will make a difference – one fork at a time! 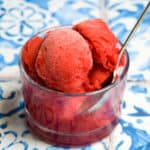 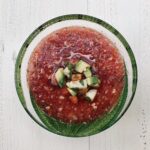 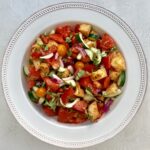 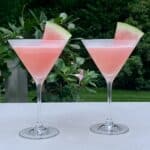 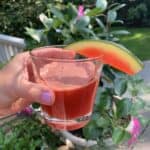 The Mindful Fork is a collaborative platform for sharing eco-conscious recipes, products, and courses providing the tools and knowledge to eat mindfully & shop consciously, while making a difference – one fork at a time!