Vichyssoise made with potatoes, cucumber and chives is a vegan twist on a classic French soup that is served cold. It is a light & refreshing soup, great to "slurp" on a hot summer day!
Jump to Recipe Print Recipe

This chilled potato cucumber soup serves well as a light, refreshing soup on a hot summer day. Classic Vichyssoise is made with potatoes, leeks, chicken broth, and cream. This version substitutes vegetable broth and just the right amount of potatoes to make it creamy without adding dairy. You can add a tiny drop of vegan sour cream for additional flavor. It makes a pretty topping for the soup along with a sprinkling of chives!

How do you make Vichyssoise?

I love to make Vichyssoise Soup because it only requires 7 ingredients, one pot, and a blender! It is super economical and can be made in only 45 minutes. Just refrigerate it for about an hour and serve it chilled, topped with chives or dill. I usually make it in advance and serve it for dinner or as a lunch soup with a side salad. I especially like to serve it poolside as a refreshing appetizer, in a shot glass! 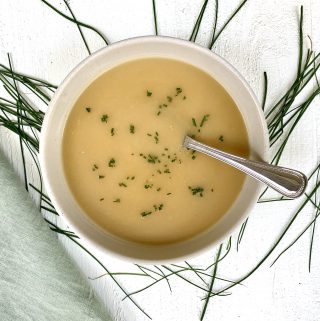 You can use an Instant Pot to reduce the cooking time. *It tastes yummy with non-dairy milk added or topped with sour cream.